Joseph F. Coradino, Chairman and Chief Executive Officer of PREIT, said, “As we look into 2020, we are beginning to believe that industry headwinds are moderating and the strategic initiatives underway at PREIT will drive growth and value creation. We have taken proactive steps to manage industry-wide disruption, such that today 47% of our non-anchor space is leased to non-mall retail tenants. We have achieved strong momentum in the first five months of operation at Fashion District Philadelphia, and look forward to the continued success of that project.”

Coradino added, “Our growing sales and traffic, along with modest same store NOI growth projected amid continued retail market uncertainty, demonstrate that our strategy is working. Further, we believe the capital transactions we are embarking upon demonstrate that the quality of our portfolio provides us with opportunities to efficiently access the capital markets.”

All NOI and FFO amounts referenced as primary factors affecting financial results above include our share of unconsolidated properties’ revenues and expenses.  Additional information regarding changes in operating results for the three months and year ended December 31, 2019 and 2018 is included on page 18.

During the fourth quarter of 2019 and in early 2020, the Company has executed agreements of sale for expected gross proceeds of $312.6 million.

Sale/Leaseback: In February 2020, The Company entered into an agreement of sale for the sale and leaseback of five properties for $153.6 million.  Structured as a 99-year lease with an option to repurchase, the agreement   provides for release of parcels related to multifamily development and is subject to ongoing lease payments at 7% ($10.75 million) with annual 1.25% escalations.  Closing on the transaction is subject to customary closing conditions, including due diligence provisions.

Multifamily Land Parcels: In 2020, the Company executed seven agreements of sale for land parcels for anticipated multifamily development in the amount of $125.3 million.  The agreements are with four different buyers across seven properties for 3,450 units as part of Phase I of the Company’s previously announced multifamily land sale plan.  Closing on the transactions is subject to customary due diligence provisions and securing entitlements.

Outparcels: The Company has executed an agreement of sale with Four Corners Property Trust (“FCPT”) for 14 outparcels, generating $29.9 million in total proceeds.  We have closed on the sale of four of the parcels, totaling $10.5 million.  The remaining 10 are expected to close in 2020 and are subject to customary due diligence provisions.

Hotel Parcels: The Company has executed two agreements of sale conveying land parcels for anticipated hotel development in the amount of $3.8 million.  The agreements are with two separate buyers for approximately 250 rooms.  Closing on the transactions is subject to customary due diligence provisions and securing entitlements.

The table below summarizes 2019 and 2020 capital activity that is expected to impact the Company’s liquidity position: 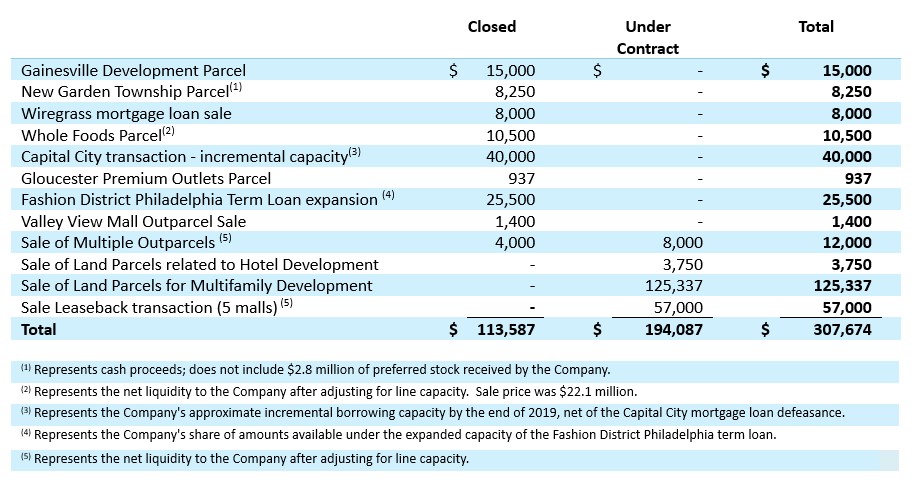 The following table sets forth information regarding sales per square foot in the Company’s mall portfolio, including unconsolidated properties:

A reconciliation between GAAP net loss and FFO is as follows:

Our guidance incorporates the following assumptions, among others:

Our 2020 guidance is based on our current assumptions and expectations about market conditions, our projections regarding occupancy, retail sales and rental rates, and planned capital spending. Our guidance is forward-looking, and is subject to risks, uncertainties and changes in circumstances that might cause future events, achievements or results to differ materially from those expressed or implied by the forward-looking statements.

Management has scheduled a conference call for 11:00 a.m. Eastern Time on Wednesday,
February 26, 2020, to review the Company’s results and future outlook.  To listen to the call, please dial 1-844-885-9139 (domestic toll free), or 1-647-689-4441 (international), and request to join the PREIT call, Conference ID  7187207, at least five minutes before the scheduled start time.  Investors can also access the call in a “listen only” mode via the internet at the Company’s website,  preit.com.  Please allow extra time prior to the call to visit the site and download the necessary software to listen to the Internet broadcast.  Financial and statistical information expected to be discussed on the call will also be available on the Company’s website.

For interested individuals unable to join the conference call, the online archive of the webcast will also be available for one year following the call.